He benefits from a diversified professional experience, having been a public prosecutor in France, a director with PricewaterhouseCoopers, a board member of the European Policy Centre, a director of XBRL international and a business and policy consultant.

He regularly speaks and lectures on a broad range of topics related to corporate governance and European affairs.

A lawyer and economist by training, Olivier started his professional career in equestrian sports (jumping).

Dr Patrick Dixon is often described in the media as Europe’s leading futurist. He is a dynamic, provocative and entertaining speaker who advises many of the world’s largest corporations on key trends, managing uncertainty, identifying risk and developing opportunities. He digs deep into the strategy of each organisation, and creates a unique presentation for each event. He has successfully identified hundreds of future business innovations. Patrick has been ranked as one of the 20 most influential business thinkers alive today.

He is the Chairman of Global Change Ltd, a growth strategy and forecasting company; he is the author of 16 books (in 34 languages); and he is a physician. Key books include “Futurewise”, “SustainAgility”, “The Genetic Revolution” and “Building a Better Business”. His newest book is “The Future of Almost Everything” (August 2015). His clients are from every industry with particular strengths in technology, marketing, consumer insight, banking and health — and include Google, Microsoft, IBM, KLM/Air France, BP, ExxonMobil, World Bank, Siemens, Ford, Sara Lee, Prudential, Aviva, Barclays, UBS, Credit Suisse, PWC, Hewlett Packard, Gillette, GSK, Roche, Wyeth Pharmaceuticals, Novartis, BASF, Forbes, Fortune, RBS, Zurich Financial Services, Tetrapak, Unisys, BT, BBC, Fedex and DHL.

He has also worked as Group Strategy Director for Acromas Ltd, which owns the AA and Saga (group turnover > USD 3bn from financial services, roadside rescue, holidays, publishing and health care). He is a non-executive director of Acromas Health Care (Allied Health Care Ltd, Nestor Health Care Ltd and Saga Health Care Ltd), which delivers as a group over 40 million home care visits a year across the UK, 24-hour live-in care, out-of-hours medical cover, hospital-at-home, end-of-life, dental, forensic medicine, nursing and prison health. He is also Chairman of the biotech company Virttu Biologics Ltd, which is conducting clinical trials on new cancer treatments. Patrick’s web pages have been visited by some 15.5 million different people, and are a rich source of substantive thought leadership on a very wide range of topics.

uende is a thought-leader on optimizing workplace culture, the future of work, and engagement in the workplace. He believes that if he can help make people’s lives better at work; he can make people’s lives better. Prior to NoW Innovations, Eric cofounded DRYVER Group, a consultancy focused on the attraction and retention of top talent. Here he co-developed a tool that quantifies workplace culture. Eric and his team helped pinpoint strengths and opportunities in an organization to optimize culture, improve attraction, and mitigate poor retention numbers.

Believing that collaboration is a key to success, Eric has helped develop a partnership network in Canada to emphasize the importance of teamwork and the delivery of great work. Eric has been featured in Forbes, Inc., Thrive Global, the Huffington Post and many other prominent media organizations.

He has been recognized as one of only ‘100 emerging innovators under 35’ globally by American Express and an active ‘Global Shaper’ with the World Economic Forum. Eric sat as Community Integration Chair for Global Shapers Calgary, a community that functions under the World Economic Forum. He is a former Canadian G20 YEA Delegate, representing Canada in Sydney in 2014.

Daniel Stover manages the west coast office for Integrated Leadership Systems from Los Angeles, California. He received his education from The Ohio State University where he studied Psychology, Criminology and Security & Intelligence. The core of his development and training was in cognitive-behavior psychology and mental health crisis intervention. Through this experience, he learned that his passion and purpose is to help others understand their emotions.

Dan has concentrated this passion on working with companies ranging in size from 30 to 1,000 employees in ten states in multiple industries. Some examples of his clients are: law, tax and consultative accounting services, healthcare executives, physicians, construction and general contractors, technology entrepreneurs, pharmaceutical manufacturing, robotics manufacturing, university administration and wellness providers.

The scope of Dan’s work in succession planning, team consulting, coaching, training and development provides insight into the core issues that keep an individual or team from performing at their highest level. Although the work is designed to address emotional intelligence, it is aimed to positively impact the bottom line.

Dan is a community advocate and has served on multiple non-profit boards in the areas of mental health and community development in both Columbus, OH and as a volunteer in Los Angeles, CA. In his free time, Dan’s activities are hiking, painting, sport-shooting, reading, writing and continuing his formal education.

Erick is a Managing Director in Protiviti’s Charlotte office and part of their Risk & Compliance practice. He has more than 25 years of broad-based consumer and financial compliance experience in addition to solid international compliance expertise in areas such as the Foreign Account Tax Compliance Act (FATCA). He also has strong technical knowledge across a broad range of regulatory areas including banking, capital markets, insurance and trust.

Prior to joining Protiviti, Erick built and led the North America compliance practice at another large consulting firm. In this role, he developed solutions and led projects for banking clients which covered numerous consumer compliance regulations, Bank Secrecy Act/AntiMoney Laundering requirements, as well as the Dodd-Frank Act.

In addition, Erick worked at a Top 5 US bank holding company, where he was a managing director and corporate compliance executive.

Prior to joining Protiviti, Alexander gained comprehensive legal experience and advanced graduate legal training at Boston University School of Law where he served as a teaching assistant and contributed to developing a course on managing compliance risk in international business networks.

Legal professionals in particular benefit intangible and material ways when they communicate effectively.  Barbara’s work in the legal sector includes seminars for partners, associates and staff, along with the one-on-one coaching of senior lawyers at top law firms.  Her series of workshops for the Chief Judges Council earned election to their speakers’ hall of fame.

Hundreds of executives in the global commercial sector have improved the power of their persuasion in Dynamic Communication programs. Clients include Blackstone, Franklin Templeton, First Republic, Morgan Stanley, Merrill Lynch,

Her work in the non-profit sector includes training for the International Monetary Fund, the American Association of Museum

Dr Tannenbaum has been awarded many professional and academic honours, including Business & Professional Women’s Businesswoman of the Year and numerous outstanding professor-of-the-year awards at Brown University.

Barbara earned her doctorate in communication studies with a minor in social psychology at the University of Massachusetts, Amherst.  Her research interests include gender and communication and how power is achieved via persuasion.

Mr Medlin graduated from the University of Florida with a Bachelor of Arts degree in Criminal Justice in May of 1991.  After commissioning as a 2ndLt, he attended

The Basic School (TBS) and the Infantry Officers’ Course (IOC). Upon graduation, he reported to 1st Battalion, 6th Marines at Camp Lejeune, North Carolina, in February 1992.

Mr Medlin served in the following billets throughout his 26-year military career:

Since retiring from Active Duty on July 1st, Mr Medlin began working for GORUCK Events as a Special Operations Cadre. 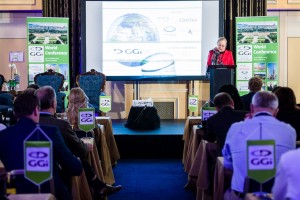 A career diplomat, H.E. Benita Ferrero-Waldner has been Secretary of State and Minister of Foreign Affairs in her native Austria, and Commissioner of the European Union (2004-2008). She began her professional career in the private sector in the 1970s and entered the Austrian diplomatic service in 1984. In 1995 she was Head of Protocol to the Secretary General of the United Nations, Boutros Boutros-Ghali, and from 1995 to 2000, Secretary of State for Foreign Affairs.

In early 2000, Ferrero-Waldner became Minister of Foreign Affairs, a post she maintained until October 2004. In 2000, she was also President of the Organization for Security and Cooperation in Europe (OSCE). In January 2004 she stood for the office of President of Austria. At the end of the same year, she became European Commissioner for Austria in the Barroso Commission, taking the office of Commissioner for External Relations and Neighbourhood Policy until the end of 2009 when she became Commissioner for Trade, a post she held until February 2010. Today, apart from being President of Spanish Foundation Euroamerica, she is a Board Member of various foundations (Fundación Princesa de Girona, Fundación Bertelsmann, Fundación Novia Salcedo…) and enterprises (Munich Re, Cremades & Calvo Sotelo Abogados, Gas Natural…). She has received numerous decorations from countries around the world. She was chosen European Diplomat of the Year by European Voice Magazine in 2007.

In 2009, she received the XVI Blanquerna Prize awarded by the Generalitat de Cataluña (Catalan regional government), and in 2010 she received the Grand Decoration of Honour in Gold with Sash for Services to the Republic of Austria, as well as the Master of the “Forum de Alta Dirección”. She has published numerous articles, essays and books, including "Charting course in a changing world" and "Development Cooperation - Challenges and Visions" ("La Cooperación para el Desarrollo-retos y visiones"). She has a doctorate in Law from the Paris-Lodron University of Salzburg (Austria) and an Honorary Doctorate from the Lebanese American University (Beirut). 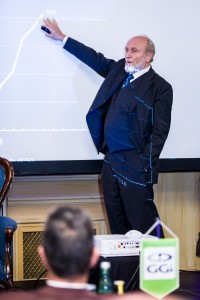 Sinn holds honorary doctorate degrees from the universities of Magdeburg, Helsinki and HHL Leipzig Graduate School of Management and he has been honoured with the Maximilians Order. His fields of interest include the economics of transition, risk and insurance, natural resources, monetary trade theory and public finance. In these areas, he has published more than 300 scholarly and policy articles.

He has published a dozen monographs with more than 30 editions in six languages. They include titles such as "Can Germany Still Be Saved?", "Casino Capitalism", "The Green Paradox" and "The Euro Trap". 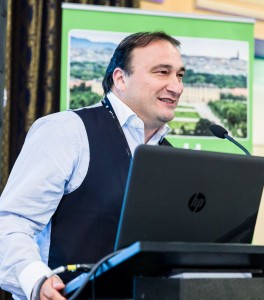 Dr Robert d’Alessandro (CREDAL Advisory Ltd., Malta) was presented with an Excellency Award and thanked for his years of service as his time on GGI’s Executive Committee came to an end at this Conference.